Last Thursday (22nd) was a sunny, mild, blue-sky morning here on Northern California’s redwood coast. Great weather for tripawd Phoenix  to go to Samoa Beach on the peninsula to celebrate a wonderful occasion: her 2-year ampuversary. When we departed from our house in Eureka, an excited Phoenix launched herself from the adjacent sidewalk curb onto the carpeted floor of the pickup truck. When she first started jumping up by herself, it used to worried me. Now, although I’m always watchful and ready to pick her up, Phoenix prefers to have her strong back legs propel her. When we arrived at Samoa Beach, the four of us–Phoenix, her 13+ year-old beagle sister, and we two humans–were blessed to have the sands by the Pacific to ourselves (it was a weekday, so most people were at work or school) for 75-minutes. Phoenix and her sister scampered freely while we headed south towards the jetty, where a few surfers were catching waves. At times, I’d let Phoenix run off ahead with her sister & Mom, while I stayed behind. Then I’d call her and crouch down. Phoenix would turn around and RUN! (not hop) back 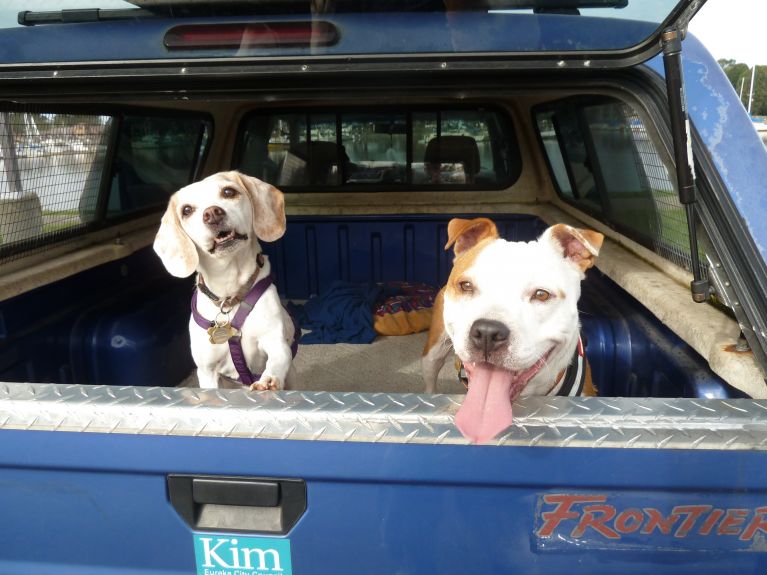 to give me face licks and get a small reward snack. When it was time to leave and we arrived back at the truck, Phoenix looked at me, wagged her tail and said, “I’m tired now, pop, so lift me up.” I picked her up, she drank water from her bowl, had more snacks and then curled up in her bed for the 10-minute ride home. A great morning adventure for a courageous girl.

4 thoughts on “Ampuversary at the Pacific”