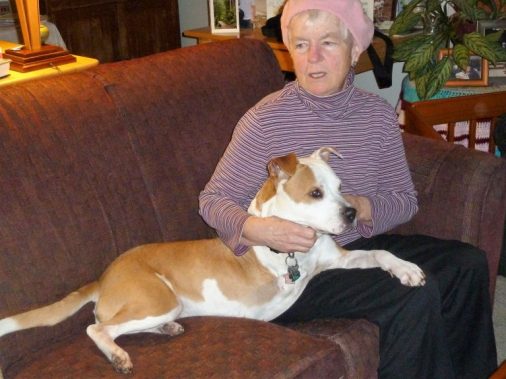 Hello again, tripawd families! Phoenix is still a hoppy, sweet, tail-wagging, face-licking dog. In two weeks she’ll celebrate her 2-year ampuversary (and in three months it’ll be 2-years since we adopted her). She’s healthy and enjoys our 1+ mile walks around our part of town. On a few occasions, people on the sidewalk or driving by in cars have called “Champion!” I learned this refers to the 3-legged pit bull (also missing her right front leg & with very similar coloring) on the former TV show “Parks & Rec.” And, in many ways, Phoenix is a champion. Like many tripawds, she doesn’t seem to care–or notice–she’s only got 3-cylinders as she hops, runs and jumps her way through life. Phoenix loves to jump up on the couch to greet friends, as in the attached photo when she welcomed Laura, usually a “cat person,” but now friends with Phoenix.

6 thoughts on “Another “Champion” nears her 2-yr. ampuversary”